Demolition Contract of the Year US$1 million or over 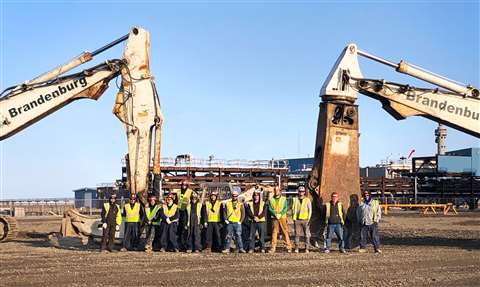 Following Erith Contractors’ win in Civils, Brandenburg emulated the British company by claiming a second consecutive prize in this category after winning with its Chambers Works Complex in 2019.

The project involved this year was very different – for a start it took place on SDI Island, in Prudhoe Bay, Alaska, almost 2,000 km (1,200 miles) south of the North Pole. It was a considerable logistical challenge, requiring months to plan the event, develop engineering drawings and co-ordinate project details.

Brandenburg was brought in to dismantle the land-based rig and the scope of work including structural demolition, fluid removal and environmental remediation. The project took around 20,000 man hours to complete with the team remaining on high alert to ensure no harm to the island where the demolition took place.

Dennis McGarel, Brandenburg’s vice president of sales and estimating, said: “We accepted the challenge of performing some works we hadn’t done before, equipped our execution team properly and they executed the project flawlessly.“