USA-based attachment manufacturer LaBounty – the demolition brand of Stanley Infrastructure – believes it has the broadest selection of demolition attachments in North America. 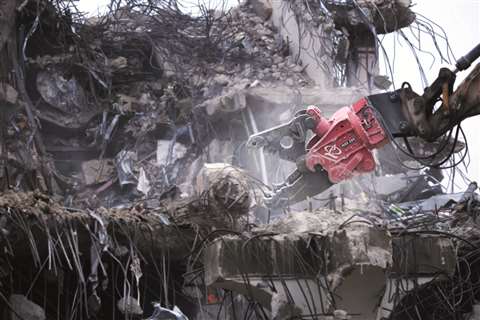 LaBounty’s MRX multi jaw demolition tool, one of two product launches by the company in 2020

“With these additions, we have dramatically expanded the solutions available for demolition customers,” said Michael Moriarty.

“It is really just an extension of our overall strategy to be not just a one stop shop for demolition contractors but across multiple industries.

“We had the MRP at the Live Demo event during the NDA (National Demolition Association) Convention and Expo in Austin, USA, earlier in the year and it was working round the clock – everyone wanted to try it and the feedback was tremendous.

Using the LaBounty MRP in primary demolition
“And what we are hearing now from out in the field is that people are able to use it in the primary demolition to get the structure down, and then there is just a minimal amount of secondary processing to be done to further downsize and remove the rebar. But the product can do that just as efficiently. Essentially, what you are seeing is its versatility so as a rental tool there are a lot of applications you can get into. We think it can do just about anything on a demolition job as it relates to concrete.

“Obviously if you need to cut some steel as well that’s where the MRX would come in.” 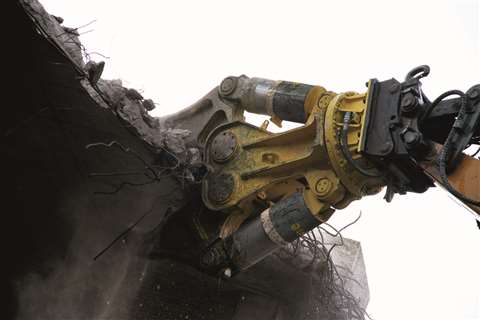 Strong walls and substantial foundations were waiting in the basement – the walls, which had been pre-slit with the HB 4700 hydraulic hammer, were finally cut out with the new CB 5500 concrete buster and prepared for pulverisation.

Concrete Buster range extends to six
The CB 5500 is part of the Concrete Buster range, which has recently been extended to include six models with operating weights from 320 to 7,400 kg (705 to 16,314 lb) for excavator classes from 2 to 85 t. The CBs have been specially developed for heavy foundation work and are said to be particularly suitable for demolition with long-front excavators.

Movement is achieved by the hydraulic oil pressure on the piston head and speeded up by the oil and gas load of the accumulator on the top of the piston.

The breakers are fully hydraulically operated and this guarantees reliable operation when productivity matters. They can operate in all possible positions due to long, lightweight piston and a large number of seals.

Green Attachments’ Yellow R rotating hydraulic pulverisers are suitable for the secondary demolition phase as well as for the primary demolition of reinforced concrete structures. The geometry of the pulverisers’ hydraulic rotation and straight design allows easy operation in demolition and at ground level.

The robust structure of the pulveriser with fast and powerful performance allows efficient demolition, the most typical are reinforced concrete structures. Yellow R pulverisers design has been made according to customer needs for a light and durable structure combined with high power and efficiency.

Vibratory compactors are often used at places that are hard to reach. Bridges, quay walls or working from a pontoon are rule rather than exception. Mobility and manoeuvrability of the excavator in combination with the vibratory hammer is therefore essential. 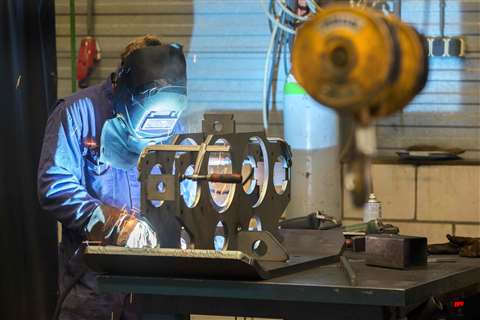 Netherlands-based manufacturer Dehaco says the impact force of a vibratory hammer is created by turning an eccentric, or an unbalanced weight. Working with a vibratory hammer that is equipped with two eccentrics, they always rotate in opposite directions. This keeps horizontal movement to a minimum, which gives “calm” in the boom, while an optimal vertical force is released when both weights press down simultaneously.

Dehaco examined the idea of combine these positions into one vibratory compactor, so one tool would work in both cases.

Separate motors for the Hyrax series
In the Hyrax series, the two eccentrics are separately driven by two separate motors without gear transmission. Dehaco says this makes this system much easier to maintain, and directly provides an overpressure protection, volume control outlet function to protect the motor and a connection protection for the press and return line. Steelwrist’s new SQ fully automatic quick coupler is its ‘biggest’
Designed for use with excavators weighing from 40 to 70 tonnes, the SQ90 is meant to provide higher hydraulic flows with less pressure drops