The global pandemic has created many challenges for heavy haul and rigging companies in Mexico.

Due to the global Covid-19 pandemic, 2020 has been a year full of challenges for logistics and transportation companies in Mexico. Tradelossa has been carrying out the task of transporting 33 coolers for the “Empalme” energy project. The job has encompassed 23,000 miles and more than 1,500 tons of freight over the last eight months, all in compliance with Covid-19 safety protocols established in the U.S. and Mexico.

Tradelossa hauled 33 coolers to the Empalme plant in Panuco, Veracruz.

The project began in the city of Laredo, TX where Tradelossa received the 33 coolers throughout the year, performing cargo rigging operations within the U.S. for their border crossing into Mexico, where they would be transported to their destination in the coastal city of Pánuco, Veracruz.

The task for Tradelossa engineers began much earlier than when the first cooler was received. To ensure the success of the job, the parts would need to go through a series of specialized rigging processes developed by Tradelossa’s engineering staff. Each of the 33 components had to be prepared for crossing the border and the various transportation and rigging requirements in the two countries.

Once properly modified, and with the help of two 120-ton cranes with a three-rocker system and spreader bar, the pieces were transferred to Tradelossa’s transport system, an 8-axle hydraulic configuration.

Departing in a convoy of five to six components per trip, each trip lasted up to two weeks between the border crossing and transfer within Mexico. Tradelossa was in charge of the transportation and safe arrival of the coolers to their destination point at the customer’s facility in Pánuco, where they would be unloaded and the equipment released to repeat the process again.

“During the entire process, our team approached local authorities to schedule the crossing of the pieces through the most populated areas along which our selected route marked us,” according to a Tradelossa executive.

To ensure the integrity of all the members involved in the operations, it was necessary to follow a rigorous system to avoid contagion and exposure to Covid-19. This also involved the digital exchange and delivery of the necessary paperwork for the border crossing.

“It also meant a constant monitoring of our team of experts residing in Laredo, TX because it was their responsibility to review and maintain each piece prior to the border crossing between the United States and Mexico,” Tradelossa said. “Tradelossa completed one of its most important projects of the year, coordinating operations in two different countries and adapting to the necessary health and safety processes, successfully concluding another project.” 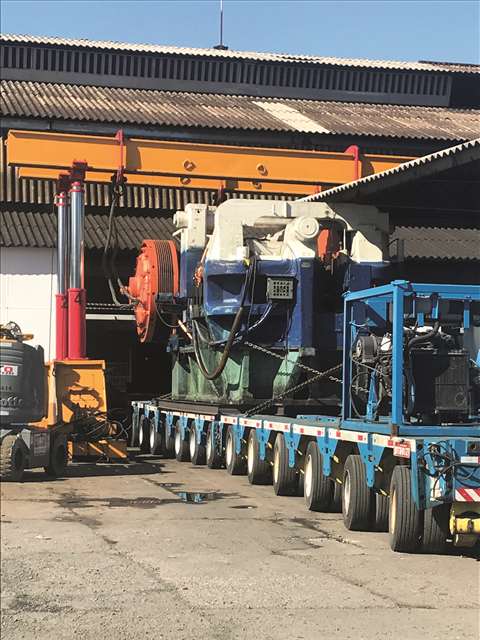 The cargo was offloaded to modular transporters.

The customer needed to transport an oversized compressor machine, weighing 125 tons, as well as 14 pieces of varying sizes of accessories. One of the first challenges was that the equipment was located at an active factory within an 18-foot concrete pit. Once the units were lifted out of the concrete pit, they needed to be dissembled into 14 pieces. The pieces were moved via multi-axle platform trailer through the streets of Jundai to the Port of Santos.

Due to Covid-19, cargo could only move at night. The 98-mile trip took seven days.Once at the port, Dachser had concluded that a break bulk solution was the optimal approach using a container ship. A high capacity floating crane was used to offload the cargo onto the ship. The 436-mile trip to the customer’s plant in Silao, Mexico took three days.