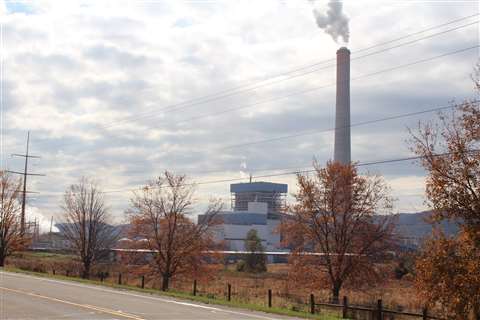 Killen Generating Station, Ohio. Photo: FunksBrother licensed under Creative Commons Attribution-Share Alike 4.0 International. No changes were made to the photograph

This follows last week’s accident at the site which resulted in the deaths of two workers, one of whom has still to be recovered. The men have been named as Clyde Douglas (Doug) Gray and Jamie Fitzgerald.

The engineering plan will be developed by Thornton Tomasetti after a site visit and reviewed for safety compliance by the US Occupational Safety and Health Administration (OSHA) and other law enforcement agencies to protect workers on site during the removal. It is believed that the process of removing the debris could take up to two weeks.

A statement from Adamo group president Richard Adamo said: “We express our deepest sympathy to the family and friends of Clyde Douglas Gray, who tragically lost his life in the collapse that occurred Wednesday at the Killen Generating Station demolition site in Adams County, Ohio.

“Our condolences, thoughts and prayers are with his family, his fiancée, his friends and his co-workers during this very sorrowful and difficult time.”

In a later statement, Richard Adamo added: “We wish to advise you of the status of our efforts to locate our deceased employee, Jamie Fitzgerald. As you know, we have been using all resources available to remove the debris as expeditiously and safely as possible.

At this time, Adamo Group has determined that much more debris must be removed based upon the probable location of Jamie. To continue the removal of the debris at the Killen Generating Station demolition site in Adams County, Ohio, an engineering plan must be developed.

“Based upon the amount of debris required to be removed, the process could take up to two weeks. After the engineering plan is developed and approved, additional information will be released.

“We trust there is an understanding of how his process must be done in a manner that does not pose a safety hazard to those working on the recovery effort and is done with as much sensitivity as is possible.”