Approximately 70,000 backhoe loaders were sold globally last year, with around 55% of them sold in India, according to data from industry experts Off-Highway Research

Bobcat has launched the R-Series B730 backhoe loader.

. For entrepreneurs wishing to enter the construction industry in India, the backhoe is an affordable and versatile product, while they are also used in rural settings to maintain roads and irrigation systems, among numerous other applications.

While India is by far the largest market for backhoe loaders, the machine is popular in emerging markets across the world, particularly in the Americas, eastern Europe, the Middle East and Africa, where the concept has been well-established over the years and a multi-function machine which can do a bit of everything suits the market.

“Specifically, within the United States and Canadian markets, some backhoe customers have migrated a part of their fleet to compact excavators, compact track loaders or skid steer loaders to better fit the jobs they serve. However, many other customers still value the self-transportability of the backhoe from jobsite to jobsite.

“Additionally, once the machine gets on a jobsite, it provides versatility like no other machine, tackling various tasks from trenching and backfilling to stockpiling and loading trucks, and everything in-between.”

A spokesperson from JCB makes the point that the usage of backhoes varies from market to market but that they are, more often than not, worked very hard. “The level of usage and breadth of applications varies considerably between developing and developed markets,” commented the JCB spokesperson.

“Customers’ demands are constantly increasing with particular focus on performance, quality and return on investment. JCB backhoes do get worked very hard and, in some markets, can operate for up to 3,000 hours.” 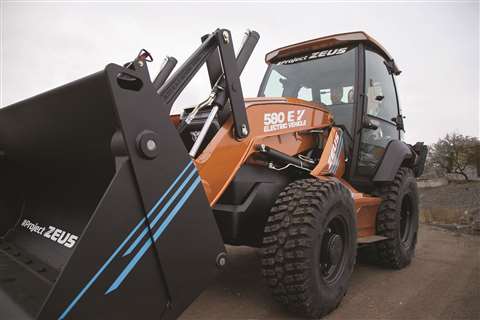 Case’s ‘Project Zeus’ is said to be the industry’s first fully electric backhoe loader. It is still in the development phase

Despite the hardiness of backhoe loaders and their undoubted popularity in emerging markets where price considerations often reign supreme, manufacturers are putting new technology and features into them. For example, Caterpillar’s Richard Maddocks, backhoe loader product and application specialist, is keen to highlight the colour LCD touchscreen on Caterpillar’s backhoes.

Caterpillar recently announced four new backhoe loader models, the Cat 428, 432, 434 and the 444 machines. On these new models – for the first time on a Cat backhoe loader – a new, optional, touchscreen LCD display enables the operator to interact with machine functions to quickly change key operating functions such as pattern control and hydraulic control settings.

“The new optional colour LCD touchscreen is an industry first. It allows the operator to interact with the machine functions and access information such as machine diagnostics, service reminders and view warnings,” comments Maddocks.

“From the display screen the operator can customise the machine to his/her preference, including adjusting the speed and response of the controls, as well as the auxiliary flow settings and the programme loader kickout and return to dig.”

Looking to the future

From new technology that is being implemented now, to something with more of an eye on the future: Case Construction Equipment’s fully electric backhoe loader that was launched at this year’s Conexpo show.

The 580 EV (Electric Vehicle) concept, dubbed Project Zeus, is said to offer the same power and performance as a diesel-powered Case backhoe loader, but with zero emissions and considerably reduced operating costs. Two machines have already been sold to US-based utilities companies, with the concept planned to remain exclusive to the North American market.

Talking about the potential benefits of the machine, Egidio Galano, product management director, Case Construction Equipment Europe, said, “Besides the zero emissions and reduced ambient noise, invaluable benefits when working in an urban environment, we are seeing an improvement in both energy consumption and productivity.

“This involves both increased control and management tools to ensure overpowering in specific applications or operations doesn’t occur, leading to energy waste. The eTLB also has immediate power ready. At low idle, a diesel engine has reduced torque and requires time for the engine to ramp up to meet the load demands; electric motors, on the other hand, have instantaneous torque and peak torque available at every operating speed.”

Galano says the company do plan on producing the model in large quantities, but emphasised that a large amount of testing was needed before such a point was reached, commenting that, “We expect to mass-produce an electric backhoe loader after an extensive period of customer feedback on these first prototypes and some adaptation for mass production.

“Case’s goal is to continue to innovate and provide our customers with solutions that meet their application and performance needs while improving their job site efficiency and availability of power sources.”

Despite the uncertainties brought about by the Covid-19 pandemic, new equipment launches are still happening, although the launches are now held remotely. In one such virtual

press conference, Bobcat has announced that it is looking to strengthen its position as a compact equipment supplier in the Middle East, Africa, Russia and the CIS (the Commonwealth of Independent State) countries with the introduction of its new R-Series B730 backhoe loader. 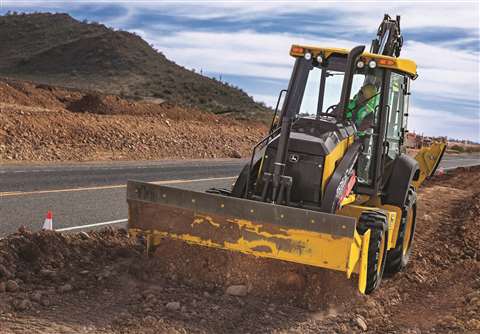 According to Roy Haaker, vice president, sales and marketing EMEA, Bobcat, backhoe loaders represent the biggest proportion of the compact equipment market in the CIS region.

Gaby Rhayem, regional director MEA, Bobcat, added to this, saying, “Our new generation R-Series B730 backhoe loader… will allow us to gain market share and further improve our position throughout the region.

“At Bobcat, we are dedicated to providing our customers with the performance and innovation they need. Our new generation R-Series B730 backhoe loader meets all these goals and will allow us to gain market share and further improve our position throughout the region.”

The new R-Series B730 is available in a choice of configurations for different applications. The engine cover has been designed as a single unit to make maintenance access easier. Daily checks can be made at ground level without raising the boom.

The model is fitted with a new six-pillar cab that provides operators with a choice of control configuration: ISO, SAE or Cross (X) backhoe controls. The customer can build their preferred control pattern or change to pilot controls with a selectable control pattern, making it easier for operators to transition from one machine to another.

The inside screen of a Caterpillar backhoe loader

The multi-function loader lever, featured as standard, has the 6-in-1 bucket, differential lock and transmission disengage functions integrated into a single control grip. The same lever also assists with Return to Dig and Float operations.

The R-Series B730 is powered by a Perkins 1104C-44T 100hp engine with a maximum torque of 408Nm, making the backhoe suitable for demanding applications.

At the launch, the significant impact of the Covid-19 pandemic on demand was acknowledged, but the speakers added that in the third quarter of 2020 most markets have started to recover and sounded a cautiously optimistic tone for the future.

Saving fuel for profit and the environment

Hidromek has been the market leader for backhoe loader sales in its native Turkey for over a decade and has backhoes working on projects around the world, with the company reporting a growth in market share in countries as varied as Australia, France, Argentina and Mexico.

According to spokesperson Ferhan Ficici, Hidromek backhoe loader and wheeled loader engineering manager, emissions and fuel consumption are both important issues for customers. This is for a number of reasons, including environmental concerns, to meet increasing government regulations and to save money on fuel costs.

“While the world population is increasing, the proper usage of resources gains importance day by day. This is significant both economically and environmentally. The products with low emission will be encouraged. Protecting and leaving a livable environment for next generations is our primary duty and we are happy to work for this task. This is why, designing low emission machines is extremely important for us. Hidromek backhoe loaders are compatible with US EPA Tier 4 Final and EU Stage IV exhaust gas emission regulations, like every Hidromek product.”

Ficici adds that all construction products are expected to be more efficient than ever before, with energy being a major contributor to operating costs. Due to this, he says the Turkish-based company have, depending on the machine operating weight, “started to work on designing fully electrical or hybrid versions of our machines. We are working in order to design more efficient, less energy consuming machines for a sustainable future.”

No matter what task backhoe loaders are performing on a construction site, John Deere’s Hennings agrees that fuel consumption is a key issue.

“Monthly fuel costs typically rank as one of the machine’s highest input costs, right behind labour. While backhoes may not burn as much fuel per hour as some of the other larger machines on the jobsite, it all adds up,” he says. 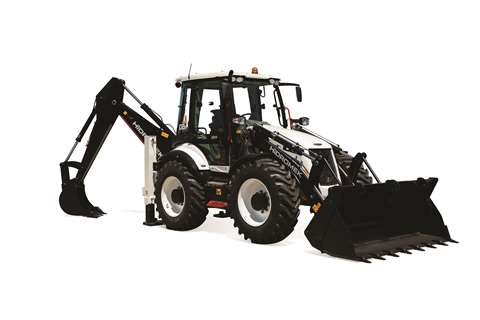 “The John Deere backhoes are equipped with features that help customers to combat machine idle time and conserve fuel. Auto-idle automatically slows engine speed when backhoe pilot controls are released. Pre-set engine speed resumes when levers are reactivated. Another feature, auto-shutdown turns off the engine after an operator-selected period of inactivity.”

Backhoe loaders may not be changing at quite the same pace as some other types of construction equipment, but the machines are evolving into being more productive while consuming less fuel – a combination that is hard to argue with. 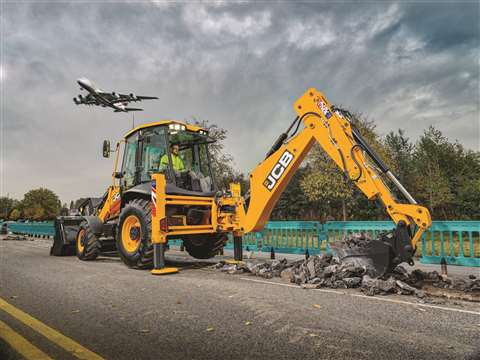 JCB has released an updated version of its 3CX backhoe loader, with an EU Stage V-compliant diesel engine. The company said the new 55kW machine offers a combination of improved operator comfort, increased productivity and performance.

The company says the 3.0-litre engine delivers 10% more torque than the previous model and estimates a fuel saving of 7%.

JCB says both tire wear and fuel consumption on the 3CX can be reduced with new auto two-wheel drive (2WD), which switches the transmission from 4WD to 2WD when additional traction is not required.

The company says that if the machine needs to dig into a pile or a face, then 4WD can be selected, as maximum tractive effort is required. When the machine backs away and starts to travel at speed, the transmission automatically changes to 2WD. Bobcat updates two of its Toolcats to use 45+ attachments
Models UW53 and UW56 are designed for hauling, lifting, mowing, towing and loading, while enhanced lighting produces more light with less power

Doosan now makes dozers, and mini excavators too
Doosan Infracore has previewed a slew of new products that will hit the construction market in 2022, including not only its first dozer but also a new line of mini excavators and more
MORE ARTICLES FROM CONEXPO-CON/AGG 365 NEWS