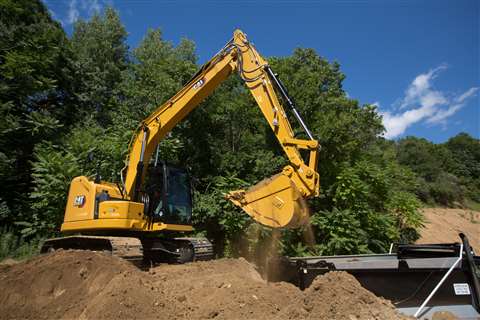 Caterpillar has introduced a new range of wheeled and tracked compact excavators, at its annual event – traditionally held in Malaga, Spain, but this year hosted virtually.

The 15 and 17 tonne class tracked models, which replace the previous F series models, extend its ‘next generation’ range which began with the 2017 launch of the 320 tracked excavator.

Adding to both its premium ‘Performance’ and lower cost GC ranges, the new launches are the 315 GC, which will be available very soon, and the 317 and 317GC models, both due out in the second quarter of 2021.

Cat also revealed the new 316 compact wheeled excavator, which the company expects to have on the market early next year.

Product specialists and operators described the two variants within Cat’s range of small tracked and wheeled excavators, with takeaways from the performance series including high performance, lower operating costs and a full suite of technology, making them easier for operators to use.

That technology includes Cat Grade Control (optionally 2D or 3D), Cat Payload and the E-Fence system, which sets lensures utilities remain undisturbed and also that the boom will not rise to the level of overhead cables.

There are other significant differences between the Performance and GC models. The 317 and 317 GC models, for example, are fitted with different engines: a Cat C4.4 for the 317 and a smaller Cat 3.6 on the 317 GC.

In terms of their purchase price, the GC machines will be offered for approximately 10% less than the equivalent performance models. These will be targeted at rental companies or customers looking for a support or utility machine intended to be operated for between 500 and 800 hours a year.

Improvements made on the machines described in the event include up to 15% more swing torque, tiltrotator integration and a saving of up to 10% in parts. They all feature larger cabs with “significantly improved” visibility.

The wheeled excavators will be manufactured in southern France, other than those intended for markets in Africa and the Middle East, which will be made in China.

The 313 and 313GC machines are currently manufactured in China, with all the orther tracked excavator models made in Japan.