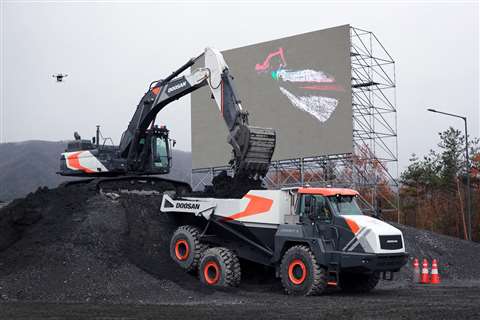 A consortium led by South Korean shipbuilding giant Hyundai Heavy Industries Group (HHIG) is close to securing a 36.07% stake in compatriot construction firm Doosan Infracore, having been selected as the preferred bidder. Doosan Bobcat – which accounted for 57% of Infracore’s 2019 revenues – is not included in the deal.

Infracore is the heavy construction division of the Seoul-headquartered Doosan group and the stake on offer – Doosan’s sole interest in the company – is said to be valued at around €565 million.

The group’s decision to sell off its stake in Infracore has been forced by its level of debt, now said to be in the region of €3 billion.

HHIG’s partner in the investment bid is a division of the state-run Korea Development Bank. Should the bid be successful, Hyundai – with Doosan Infracore, combined with its own Hyundai Construction Equipment – will become a top 15 player in the global construction equipment market.

Other bidders still reportedly in contention to buy the stake in Infracore are MBK Partners, the largest independent North Asian private equity firm, with over US$22 billion in capital under management and Seoul-based Glenwood Private Equity.

The positive results were primarily attributed to strong growth in China, a country in which Hyundai Construction Equipment has historially struggled to grow market share.