Interview: The future of tracked platforms

In late August it was announced that Dingli had acquired a significant stake in Germany-based tracked platform specialist Teupen.

The investment in 24% of Teupen’s shares will play an important role in the Chinese manufacturer’s growth in Europe and include new product development, firstly of large self propelled boom lifts in the 36m - 50m working height range. (See the interview and a wider feature on the tracked platform sector in the September 2020 issue of AI). 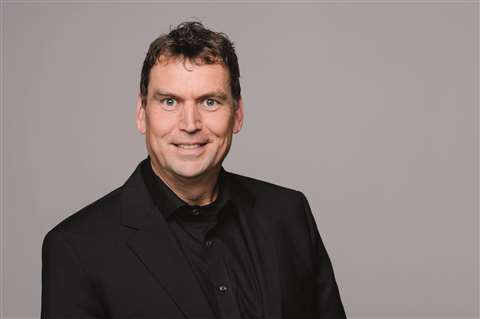 The deal means that Teupen Maschinenbau now has three shareholders, with its CEO Martin Borutta owning a 25% stake, private equity firm Hannover Finance Group holding 51% of the shares and Dingli taking the rest.

The first steps in the partnership were taken when Borutta met Dingli Zhejiang Machinery’s founder and president Shugen Xu in Germany last year. “We have a good relationship. In 2019, we just started discussing the possibility of a potential partnership between the two companies, as they were looking for a technology-driven company,” Borutta explains.

“I visited Dingli two times last year. We had lots of discussions about possible partnerships. Then Dingli decided they wanted to be partners just as the Covid situation started.”

It meant that the entire deal had to be struck remotely, something that would not have been considered possible just weeks before, with Borutta based in Teupen’s North America headquarters, in Charlotte, and the Dingli contingency confined to China.

“It was pretty impressive. Normally, people would think you need to get on a plane, go back and forth and discuss it all face-to-face. But we did the whole thing online from our offices.”

While the project is in its infancy and the products have yet to be designed from scratch, the plan is for Teupen to use its market intelligence to produce lifts that are required by day-to-day rental equipment operators.

Hence, Teupen will provide market research, customer feedback on the initial designs and carry out the research and development (R&D). Once that is completed, the products will be manufactured at Dingli’s facilities in China and sold globally under the Dingli brand name.

Borutta is clear, there will be no attempt to step on the toes of Dingli’s existing partnerships in Europe and North America. “It’s mainly for product development, we don’t have any arrangements regarding direct sales.”

Dingli owns a stake in Italy-based telehandler specialist Magni, an arrangement under which it has designed Dingli’s latest range of boom lifts. Magni is also a major distributor of Dingli scissors across much of Europe. Teupen will not delve into those working heights covered by Magni’s designs nor distribute Dingli products at this time in the continent or North America, where Dingli also owns a share of MEWP manufacturer MEC.

On the subject of Teupen’s newly designed products with Dingli, Borutta continues, “The next step will be to bring those new products from the lines in China and build trust in the brand. That is where Teupen can really support Dingli, because Teupen is a very strong brand when it comes to technology. We are not the largest in the world, but we are the most sophisticated one when it comes to technology.”

It was not just Teupen’s serial production equipment that caught Dingli’s eye. Its capability of visualising completely new products was also an attraction, for example Teupen’s state-of-the-art, ultra-rough terrain Puma 42GTX. Launched in 2016 at Bauma, the Puma is a unique combination of a Menzi Muck walking excavator chassis and an aerial platform, based on Teupen’s LEO series. “When you look at the Puma, it is not a product that everyone can build,” says Borutta.

Although Teupen does not build self propelled boom lifts, the technology is well within its skill set. “We always have to be ahead in this area of weight, height and outreach because spider lifts have to be as light as possible with the maximum performance we can provide.”

To carry out the R&D for the Dingli products, Teupen will set up an office near its head office in Germany. For Borutta it is important to keep both sides of the business separate, for a couple of reasons. “We will keep it apart as it will be more efficient and secret to the market. We will have a different office and we will rotate staff.

“One of our advantages is that we have 20 people in R&D and we can get them working on the project as we need them. We will also do the market research, get customer feedback and all the things we normally do.

“Then there is the big advantage of them being manufactured in China, so you have the advantages of volume and production costs that are much lower than ours, yet we are approaching all of the markets.” 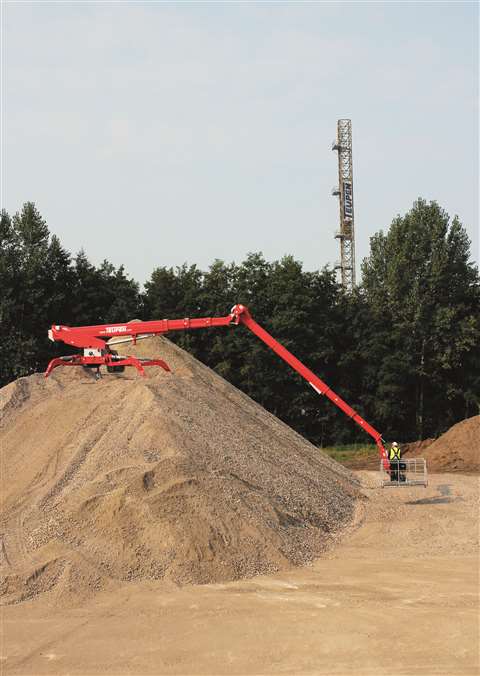 Adding to Teupen’s strength in China is its exclusive distributorship and rental agreement with Shanghai Horizon, the country’s largest access rental company. Under the arrangement, Shanghai Horizon sells and rents Teupen products, including the manufacturer’s giant 50m working height LEO50GT tracked platform. “They are also a major partner of Dingli, so this is a mutual advantage. And they will support our products in China as well.”

Summarising the overall benefits of the partnership with Dingli, Borutta adds, “I am pretty sure the big advantage will be that it will strengthen both our brands. Teupen is known as a strong brand in the spider market but we are also a smaller company and sometimes it is difficult for us to be in every country of the world. Now we have a very strong partner in Dingli, that is known as one of the rising stars of the access industry.”

Asked if Dingli is likely to take a larger stake in Teupen in the future, Borutta answers, “In principle Dingli has the possibility to increase its investment in Teupen. We have slightly over 50% private equity ownership and we all know that private equity invests in companies for a limited time.”

Turning to other matters; firstly, the unavoidable subject of Covid-19. Borutta says Teupen has fared comparatively well. “We have the advantage that we are doing very well in the US market, and we are able to support a lot of the essential services. Where we feel a greater difference is in Europe, which is still a bit slow and that has affected us.”

More than 70% of Teupen’s products are exported, with the largest of those export markets being the US, contributing 40% of annual sales and Asia contributing 20% - 25%.

In the US, much of the business currently comes from the tree care sector. “This sector is doing very well. I changed our sales system in the US at the beginning of this year and we really started penetrating the tree care market, and that is why we are very successful in it.

“We will expand in that sector and when the rental market increases, the sales will increase in this area too.” Indeed, Teupen’s biggest customers in the US are usually the major rental companies, including United Rentals and Sunbelt. “In the following years, when things are better than they have been this year, I think the big rental companies will return to their previous investment plans.”

As far as Asia is concerned, Borutta firmly believes that customers there are prepared to pay the full price for this technologically-advanced equipment. “Where there are high end construction projects, people will invest in more sophisticated maintenance products.”

However, Teupen has seen an advantage in this situation. The company does not have any distributors in its domestic and largest European market, Germany. “We sell direct, so we have a better margin. The volume is lower, but we are making money.”

Apart from new product development with Dingli, Teupen has been busy with its own line of tracked platforms in recent months. The two new LEOs; the 39GTplus and 34GTplus, are the latest additions to its standard line, although their features are far from ordinary. For example, the 34GTplus, launched at ConeExpo in the US earlier his year, has a 34m working height and 20m horizontal outreach, plus an impressive 400kg basket capacity. Another major feature is its negative working capability up to 9.2m.

Also insulated MEWP’s are an area of major interest to Teupen. At ConExpo, the manufacturer launched its first series production insulated boom, the 28m working height LEO 86SiC, offering up to 46,000 kV. Horizontal outreach is 23m with an 80kg basket load and 14.7m with maximum 200kg in the basket.

While the US is the main focus for this new line of insulated products, there are wider opportunities. “We started these for the US market but there will be other markets as well. We mainly address markets where work is performed on ‘hot’ powerlines.” 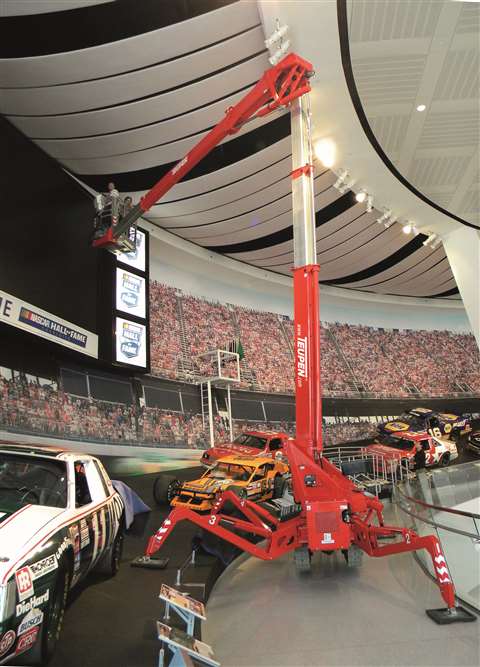 Apart from that, the company will continue development on the LEOGTplus models and its new insulated line. There will also be upgrades to some of the existing range, including the LEO12T which fits into elevators for work in shopping centres. “We will go through the whole product portfolio and adjust where necessary.”

However, there are no plans for Teupen to produce any other product types, beyond tracked platforms, under its own name. Borutta affirms, “We are the tracked platform specialist.”

And, Teupen is forecasting significant year-on-year growth of 10% to 15%, despite the troubled times, only marginally down from the 15% - 20% annual growth the company would have expected before the appearance of Covid-19.

Additionally, it seems there is scope for growth in the tracked platform sector overall. Borutta puts the market share of spiders, in the total global MEWP industry, at 3%. “If you take the 2019 market, I would think scissors and boom lifts are at around $8 - $10 billion and tracked platforms are about 3% of that.”

Taking the US as an example, Borutta adds, “There is huge potential for the future. We have 1,000 plus machines in the US but if you travel through the country you will not see one. As the market size shows, the technology is not well-known, but it is a really good alternative to scaffolding and in a lot of cases to boom lifts - that will take some time to get through.”