Conceived as a continuous unit, the plaza operated as a platform for the headquarters building, and together they took up an entire city block. While many are familiar with the role that structural engineers play in the design of buildings such as this, their involvement in bringing them down is less well-known.

When it was constructed, few could have guessed that the spacious plaza – a staple of 1970s office building design – would someday be used as a “bathtub” to catch the entire building during its implosion. Yet that is what happened in May 2020, made possible through extensive engineering analysis by experts from Thornton Tomasetti. 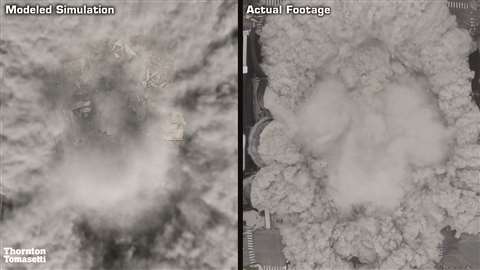 The first of four views from different directions of footage from the May 2020 implosion of One James River Plaza in Richmond, Virginia, alongside Thornton Tomasetti’s computer simulation

The firm was retained by demolition contractor DH Griffin Companies, and in addition to engineering analysis, performed a range of other services to address the risk and safety concerns due to the tight city setting. Thornton Tomasetti’s engineers collaborated with DH Griffin, implosion contractor Controlled Demolition, general contractor Hourigan and Clayco, and the building owner.

Located in a dense urban setting, One James River Plaza was surrounded on three sides by glass buildings, including Dominion Energy’s brand new headquarters, and the I-95 interstate highway on its south side. The building consisted of three layouts – the subgrade basement, levels one to three, and levels four to 21. The structure was supported by a caisson foundation with a slab on grade.

Below grade, it consisted of three basement levels, with concrete foundation retaining walls supported on caissons.

The floors consisted of a waffle slab construction, with a 9 cm (3.5 in) thick slab that transitioned to drop panels at columns.

Mechanical demolition
A range of engineering services was undertaken to address the risk and safety concerns of Dominion Energy due to the busy urban setting. The purpose of the mechanical demolition was to create a basin into which the main superstructure could be imploded.

The demolition of the three levels of parking garage and plaza framing into the tower was completed from the street level using long-reach excavators, while the rest of the structure, and where these excavators could not reach, was demolished with conventional mechanical demolition equipment. Thornton Tomasetti’s team worked with the demolition contractor to carefully divide the mechanical demolition work into phases based on floor area sections, which mirrored the contractor’s schedule.

The extent of the areas to be demolished was designed such that no shoring or bracing would be required during the different demolition phases. The work also involved designing timber platforms to distribute the loads imposed by the heavier equipment on the existing slabs to maintain the integrity of the building for the duration of the demolition activities. Thornton Tomasetti’s engineers also undertook detailed geo-structural engineering analyses to sequence the demolition work to ensure the installation of the new earth retention system, as the perimeter foundation walls were exposed during demolition.

The engineers conducted multiple stability analyses to confirm the adequacy of the structure to withstand the lateral loads in both the pre-weakened and weakened state pre-implosion. To validate the feasibility of the structural weakening plan, the superstructure had to be analysed against temporary wind loads and confirmed adequate.

Apart from the nuances of modelling such a complex structure accurately, a technical challenge the team faced was to ensure that the bending of the structure’s beams due to lateral wind loads would not exceed the designed bending under gravity loads. We conducted iterative analyses involving such scenarios until the team determined an acceptable load path and confirmed serviceability and strength requirements. 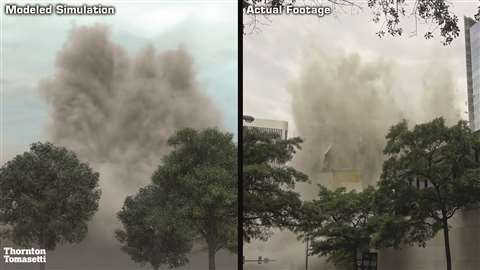 At locations where the lateral bending overcame the gravity bending, Thornton Tomasetti’s engineers proposed piling up debris on the floors to add the necessary weight. Finally, with the load path determined and added weight placed, the engineers conducted multiple stability analyses to confirm the structure could safely withstand the temporary loads imposed.

An integral part of Thornton Tomasetti’s risk and safety management was to provide several critical insights before the implosion proceeded. Detailed implosion analysis allowed demolition and implosion contractors to visualise the progression of the structure’s collapse. The engineers also assessed the risk of debris falling on adjacent properties and estimated the extent of the debris field as well as assessed potential for damage to buried utilities and the foundations of adjacent buildings from the ground vibrations caused by debris impact. They even assessed dust-volume and the dispersion of the dust cloud. 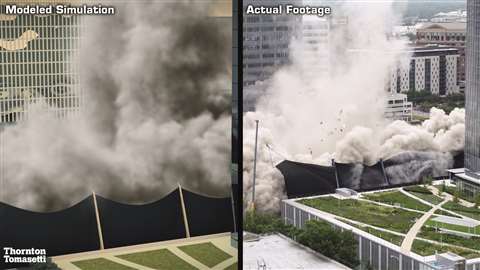 Several innovative methods to resolve the daunting technical challenges were implemented by Thornton Tomasetti’s engineers. Among these was the extensive modelling effort, given the scale and size of the building. The failure of the waffle slab also needed careful consideration, given its robust construction. The modelling of the failure of the 6.1 m (20 ft) deep transfer girder between the second and third floor also needed a higher level of resolution.

The implosion analyses were performed using NLFLEX, a nonlinear, transient analysis finite element code developed by Thornton Tomasetti, and used extensively by its engineers since 1981 to address a range of dynamic problems.

These include air blast effects on structures to disproportionate collapse and controlled demolition. NLFLEX has been validated through pre-test predictions and post-test correlation with small and large-scale tests. It was also used to perform analyses investigating numerous structural collapse events, including World Trade Centers 1, 2 and 7 in Manhattan, the collapse of the Tropicana car park in Atlantic City, New Jersey, the demolition of New Haven Veterans Memorial Coliseum in Connecticut, and the demolition of the iconic Georgia Dome in Atlanta.

In its entirety, the analyses involved displacing the concrete and steel in the structural members in accordance with the implosion plan and simulating progressive collapse of the structure under its own weight. The analyses consisted of a pre-load phase and the dynamic analysis phase.

In the pre-load phase, pre-stressing of the building structure along with application of dead load was undertaken to achieve static equilibrium. Once the structure is in static equilibrium, the dynamic demolition phase can begin, wherein structural elements are removed as per the implosion delay sequence.

During the collapse process, all critical interactions – like impact between structural members and impact with the ground – were accounted for to ensure the dynamics of the collapsing structure were accurately represented. The demolition phase allowed us to evaluate the progression of the demolition due to the combined effect of local failure of concrete and steel and corresponding effectsof gravity on the structure.

The analysis results indicated that the implosion contractor’s plan was feasible. The progression of collapse confirmed that the building by design would slightly lean to the north as it came down, so the debris would spread in the basin created by demolishing the three levels of the below-grade car park.

For ground vibration analysis, we developed a soil model underneath the building model based on the available geotechnical report. Next, a coupled implosion-vibration analysis was performed to model the ground vibrations due to implosion debris impacting on to the soil model. The soil peak particle velocity (PPV) recorded from these analyses was confirmed to be below the threshold.

On 30 May at 7 am, the building was razed to the ground in a way that belied the lengthy careful and methodical preparation and engineering. Every piece of the building that came down fell into the “bathtub” as predicted. While it took just 15 seconds, and more than 1,360 kg (3,000 lb) of dynamite and 5 km (three miles) of detonation cord, to bring down the office tower, there was more than a year’s worth of planning behind this final moment.

Author’s Details
Mahesh Raju Bailakanavar is senior associate at Thornton Tomasetti, an engineering consultancy firm based in New York City, USA, which has more than 50 offices worldwide and employs over 1,500 people.