Even asphalt pavers are going all in on electric power Imagine if it took two days to travel 70 miles. The specialized transport team of Buckingham Heavy Transport, a sister company of Wolfe House and Building Movers, does not have to imagine it because they lived it last summer when they were contracted to move two 492,000-pound transformers over a 10-week period. 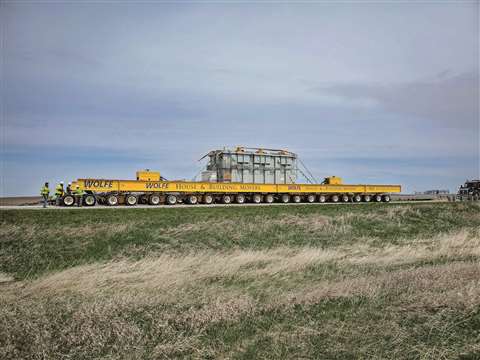 The length of the load was 180 feet and the overall permitted weight was 858,400 pounds.

The transformers arrived six weeks apart, and it took about two weeks from mobilization to placement at their destination. Buckingham used its synchronized jack and slide system to load each transformer onto the transport system at the rail siding in eastern Iowa.

The transport system included 18 Buckingham dollies under a custom dual-lane frame with one push truck and one pull truck. Two Buckingham Power Units with SmartSteer were added for greater maneuverability in cornering and assisting in self-power mode when necessary.

The first transformer haul ran into a snowstorm, causing a full day delay. The snow melted quickly, and it was sunny skies the rest of the way. The second haul also enjoyed great weather. More than a dozen workers comprised the Buckingham team, as well as a bucket truck, local utility crews, state police escorts and several tool trucks.

The transport system included 18 Buckingham dollies under a custom dual-lane frame with one push truck and one pull truck.

The route had several challenges, including overhead utilities, bridge engineering and road corner improvements. Most of the route was wide-open blacktop roads with several turns. One bridge did not pass engineering tests, requiring the team to unhook the trucks, add beam extensions and four dollies to the dual-lane frame to lower the weight per axle. The SmartSteer System was used to self-power the extended transporter over the bridge, after which the additional equipment was removed and the trucks hooked up again for the rest of the haul.

Then there was the final half-mile. The stretch to the substation was not paved and had a very steep uphill grade, making traction a possible issue. The transporter was put into a self-power mode again to assist in climbing the hill. It was a slow and tedious process, but the load made it to the top of the hill without spinning a wheel. Both the corner from pavement to gravel and the transport path inside the substation was fairly tight, so the Buckingham team removed the trucks and eight of the dollies to shorten the wheelbase and make the entire load more maneuverable. Once the first transformer was offloaded at the substation the Buckingham team completed the second haul in the same manner.