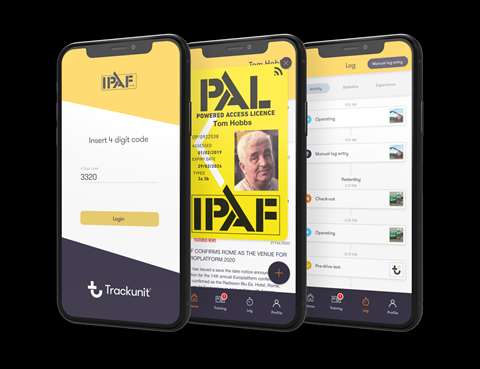 Telematics specialist Trackunit and the International Powered Access Federation (IPAF) have announced the co-development of a digital version of the federation’s operator licence, named ePAL.

Replacing the established credit card-style physical PAL Cards, ePAL credentials will be delivered and stored on operators’ mobile devices in a secure digital wallet, in much the same way that people store loyalty cards, boarding cards and tickets on their phones.

IPAF has issued more than 2 million PAL Cards and today there are 800,000 active cards worldwide.

Trackunit said the introduction of ePAL creates a digital platform to manage data and operator’s training qualifications, as well as preventing license misuse, which is an ongoing challenge for rental companies and contractors. Future updates to ePAL will also maintain and update a machine’s use log, and the partnership is considering ways in which the process could be automated to create vendor-neutral capabilities in later versions of ePAL.

Soeren Brogaard, CEO of Trackunit said, “Working with IPAF, we have created ePAL as an easy to use and update mobile app which fits better with the lifestyles of today’s tech savvy license holders. The platform developed to support ePAL offers the capability for open, industry-wide collaboration and data sharing – over time we expect to see benefits from enriching machine data with human data added by operators and other users.”

Peter Douglas, CEO and MD of IPAF commented, “Our number one priority is to increase the effectiveness of our operator safety training capabilities – ePAL is a major step forward. Importantly, IPAF members include manufacturers of around 85% of powered access equipment on the market. By working with Trackunit, we have met the need for the new development to be vendor-neutral from the ground up, giving access to industry organisations to expand its capabilities as the system grows.”

The release of ePAL 1.0 will take place in April 2021, after a soft launch at the IPAF Summit in March 2021. The second iteration is planned for release towards the end of the year, which will include increased functionality.