VR/AR: The realities of modern construction

Technology firms are not claiming innovations such as virtual and augmented reality are going to change the way infrastructure is built; they say it already has.

Furthermore, these changes are not only happening at the design and preparation sta ge of projects – they’re in operation on jobsites with in-the-field teams benefiting from the latest available technology.

Liebherr unveiled its Crane Planner 2.0 system over a year ago, as a tool for selecting the optimal equipment for specific applications, and operators themselves are appreciating the addition to their in-cab equipment.

Liebherr designed the application with planners and engineers in mind, as it provides the ability to supply infinite configurations of cranes in a multitude of positions.

The latest version of the system allows for a virtual reality walkaround of a site, with all possible movement of a crane evaluated in a safe environment.

The software is used with Liebherr’s LR 1100 to LR1300 crawler cranes and combines detailed interactive 3D models with planning data on the specific crane’s load moment limitation. Engineers can input data that allows the system to evaluate potential collisions and other hazards.

The additional benefit of the technology is that, along with its pre-construction planning applications, the system ensures safety standards for challenging heavy lifts are maintained. For instance, changes in the crane’s geometry activates immediate calculations of the entire situation, leading to a warning in the event of non-compliance with pre-set safety parameters. 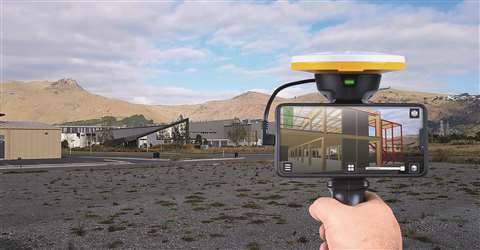 Technology firm Trimble has brought augmented reality to the jobsite with its SiteVision system, which allows operators to check the viability of new designs and alterations, as well as checking progress and identifying issues during the construction phase. Trimble says its potential to ‘bring spatial data to life’ and visually explore complex instructions from a mobile device, makes it an indispensable piece of in-the-field technology.

One of the benefits of SiteVision is that it uses GNSS (satellite) location to orientate itself in the real world, as opposed to requiring any fixed point or local marker. The software combines the satellite system with Google’s location-based app, ARCore.

Initially, a BIM (building information modelling) or CAD (computer aided design) model is imported into the Trimble Connect platform. From there it is simply loaded onto an Android mobile phone, which is then attached to an antenna with a custom bracket. Users can view planned works – potentially including below-ground works – overlaid onto the real-world construction site.

Scott Crozier, general manager of Trimble’s civil engineering and construction division, said, “If you want to see progress you can set it up so the model that is loaded is the work you’re expecting to have done by a certain date.

“With it you can better visualise complex plans, visualise underground utilities and proposed infrastructure, find design conflicts early in the process. And perform cut and fill checks. You’ll also be able to tap on elements visualised on the screen and get a pop-up box with detailed information about those components.

“We see it being used in the civil environment, but also across a cross section of all kinds of construction applications.” 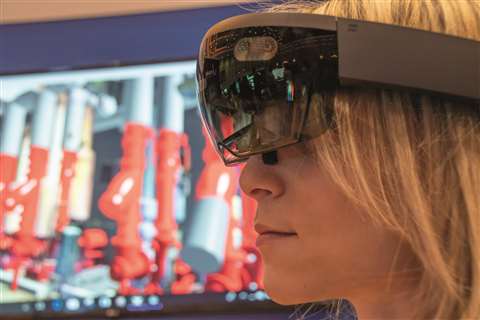 At Autodesk University, teams can be trained by learning initially in a virtual environment

Another construction technology leader, Topcon Positioning Group, has also seen that augmented reality can be hugely beneficial throughout the course of major projects.

Duncan McCormick, a construction software sales specialist with Topcon, sings the praises of both virtual and augmented reality, but believes augmented reality could prove to be the most effective onsite.

“It has more to offer the end-user,” he says. “For example, creating a ‘digital twin’ of a real-life project ahead of construction commencing allows contractors to order all the appropriate materials years in advance, offering planning security and allowing them to get the best possible prices on the market. Contractors and project owners have a set amount of time to complete a project and must do it in the most cost-effective and efficient way – augmented reality helps them achieve this.

“Having this virtual model is also hugely beneficial when it comes to clash detection, something we’re able to offer through our Magnet software. On large infrastructure projects, there are usually various stakeholders with very different objectives. Traditionally, they’re all working in isolation, which can result in ‘clashes’ that are costly and time-consuming to rectify.

“Topcon’s Magnet Live is a web-based digital platform for reviewing and commenting within a 3D virtual model. This provides project stakeholders with all the critical clash and coordination data in one single model.  Furthermore, it allows project owners to better anticipate what might go wrong before construction even begins so they can resolve the issue before it happens in real life.”

Elsewhere, software firm Autodesk has been working within the construction sector for a number of years and says VR and AR can now be particularly powerful tools for an industry faced with a shortage of skilled workers.

The company says that, using ostensibly simple techniques – including colour-coding and QR codes – combined with sophisticated technology, assembly teams with little or no construction experience, can be trained to a high degree of competency. 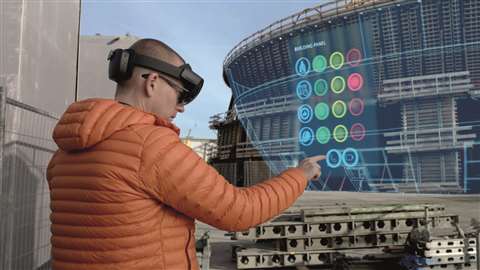 Autodesk clients are also using its VR technology to improve health and safety, by immersing workers within virtual scenarios that would be dangerous in the real world.

Matt Keen, a construction industry strategist with Autodesk, says, “Combining the power of BIM with the cloud, construction workers have the ability to move from static images to fully immersive, intelligent virtual reality. VR is a valuable tool for the construction industry, particularly during the preconstruction phase when digital data starts to translate into real-world resources and logistics.”

However, Keen sees the potential for VR’s impact on construction to go deeper still. He says, “Combining VR with other technologies, such as sensors and GPS technology on-site creates a real-time connection between a physical construction site and its digital twin in the cloud – unlocking an infinite number of opportunities for efficiency and project management.

“Bringing various data sources together and real-time analysis enables better decision making and the ability to adapt to the project’s needs. Digital twins are a critical enabler for the industry to deliver more sustainable buildings and reduce the negative impact that construction has on the environment.”

Digital twins, by the way, are digital replicas of physical things. In effect, they bridge the physical and virtual world and, as data from the physical entity is transmitted to its digital model, the two effectively co-exist as twins. In this way, engineers can test real-world scenarios on the ‘twin’, assessing its efficiency, resistance to damage, and so on.

Coming back to VR and AR, the uptake of the technology in the field will depend not only on the software developments, but also on the quality of the hardware. Together, they need to create an experience that customers feel comfortable using on a daily basis. 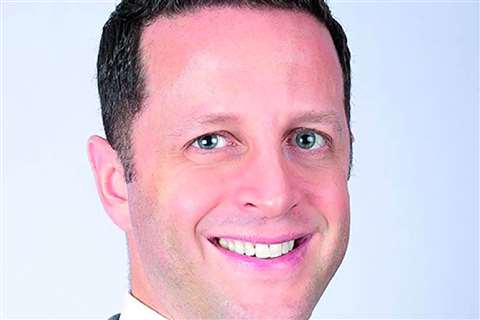 Microsoft’s Hololens headset is one of the products leading the way in terms of its applications for construction, and a number of construction technology firms have designed software with Hololens in mind.

One of them is Bentley Systems, which last year unveiled its Synchro XR mixed reality app for infrastructure projects, using the Hololens 2 headset.

In basic terms, mixed reality sits somewhere between virtual and augmented reality and, with the Synchro XR system, users can interact collaboratively with the digital construction models they are viewing, using intuitive hand gestures.

According to Bentley Systems, the combined system takes VR and AR a step further, allowing numerous project stakeholders to simultaneously view, interact with and experience 4D objects in space and time.

Noah Eckhouse, senior vice president of project delivery at Bentley Systems, said, “Our Synchro XR app for HoloLens 2 provides a totally new way to interact with digital twins for infrastructure projects. Users benefit from a new perspective on the design and a deeper, more immediate understanding of the work and project schedule.”

Mike Antis, a VP at leading technology firm Oracle Construction and Engineering, recently gave his predictions for construction technology in 2020, saying he expects to see, “More emphasis placed on aggregating and analysing data.

“We’ll see more focus on the practical use of the Internet of Things, artificial intelligence, machine learning and both virtual and augmented reality. As these innovations start to mature, they’ll find specific roles in the construction process and gain greater acceptance as a result.”