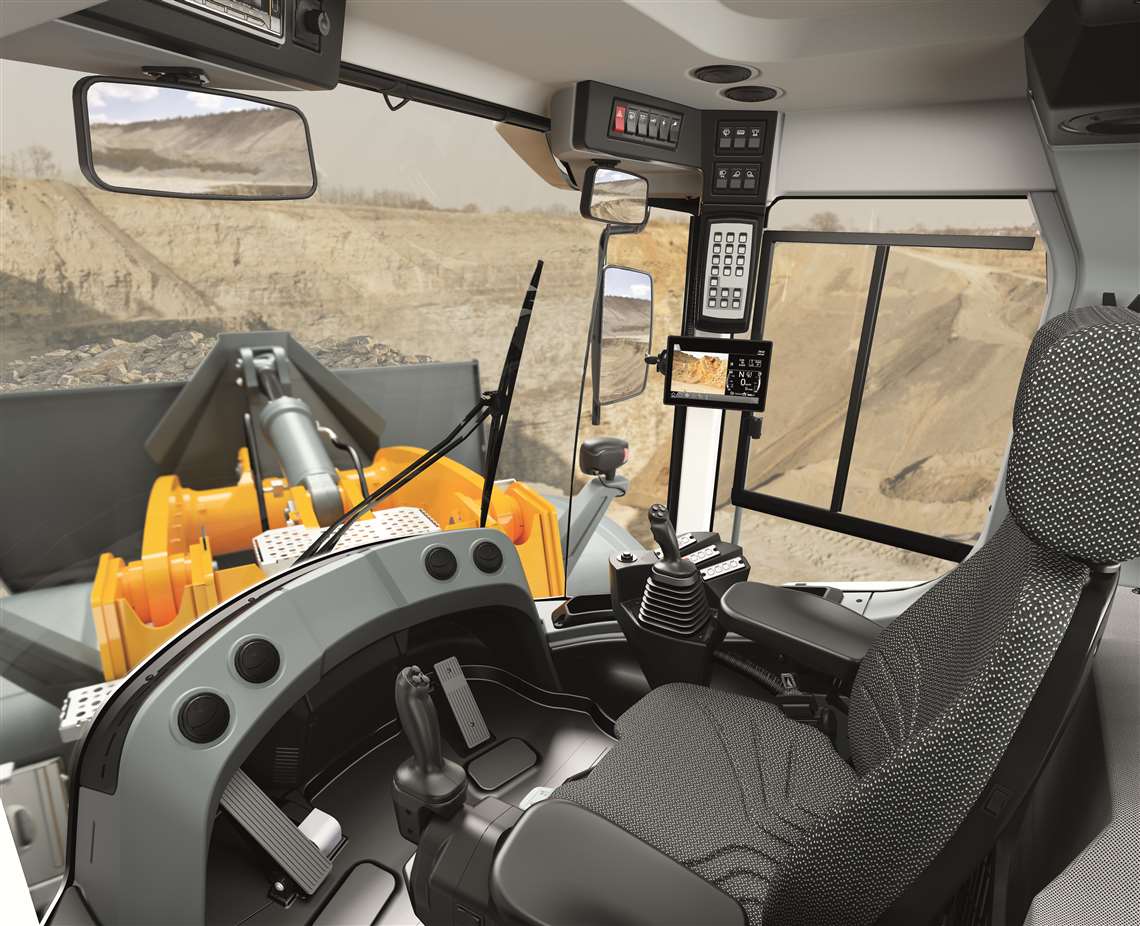 Liebherr says that joystick steering has many advantages

Even though it might not always seem that way, the equipment being used in construction is constantly changing and evolving. Sometimes those changes are big, sometimes they are small, incremental adjustments that can be hard to notice, but they are there. Wheel loaders are no exception to this.

For example, when John Deere launched the 944K Hybrid model back in 2015, it was one of the first hybrid wheel loaders to be in mass production in the industry, it was something a little bit different. Now most of the major OEMs offer a hybrid solution to their customers.

“When we launched the 944K Hybrid model, we saw significant interest, and that has only grown as hybrid-electric machinery has increased in popularity. To combat some customers’ hesitancy to the hybrid technology on the 944K, John Deere included an industry-leading eight-year/20,000-hour warranty on the power electronic components,” says Luke Gribble, solutions marketing manager, quarry & aggregate, John Deere.

“Now as these machines have surpassed one million field hours, as of October 2020, it’s easy to see that customers have accepted the durability and performance advantages of this technology within their applications.”

While changes aren’t always as big as the move to hybrid power, when OEMs launch new models now there are a series of improvements and tweaks: these often involve a better cabin for the operator and the integration of new technology, as is the case with Doosan Infracore Europe’s recent launch of the new DL420-7 Stage V wheel loader.

The new model is said by Doosan to have a new design, providing higher performance, increased fuel efficiency and an enhanced environment for the operator compared to the previous Stage IV model. 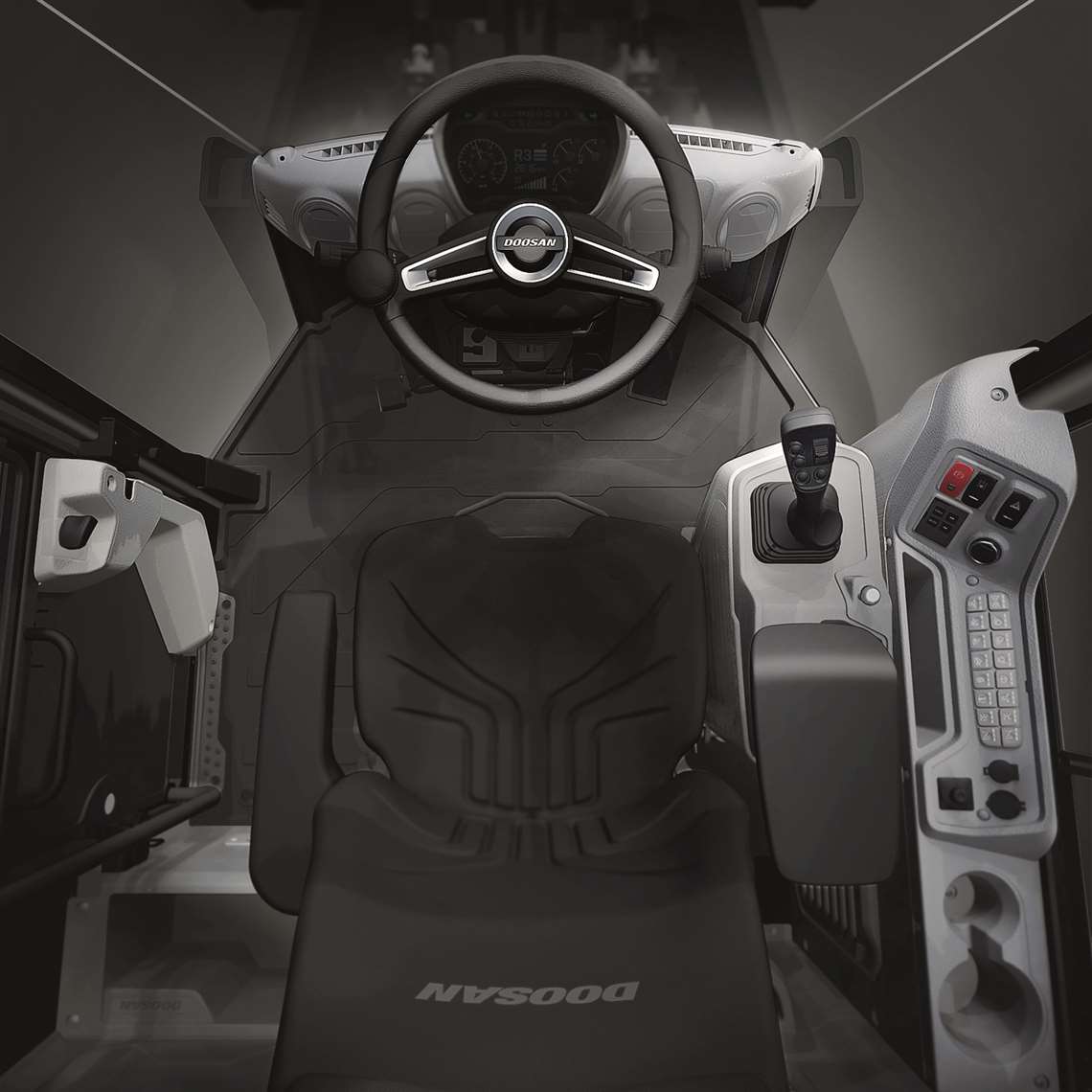 Increased operator comfort is a priority for all OEM

Using the new Doosan Smart Key system on the control panel in the cab, the operator can start the machine using a keyless device, helping to prevent machine theft. Up to six machines can be registered on each keyless device and the Smart Key system provides remote door control, door lock and unlock, door release, searching and other functions.

The new EMCV (Electric Main Control Valve) joystick fully integrated in the armrest is another standard feature in the cab, providing the operator with, according to Doosan, smoother and precise controllability. The sensitivity of the joystick control can be set and altered according to operator preferences using the new 8-inch touch screen monitor.

The DL420-7 has a higher standard bucket capacity of 4. m3, the largest in its class, and provides a 7% increase in productivity over the previous model. With automatic five-speed powershift transmission and heavy duty HDL axles as standard. 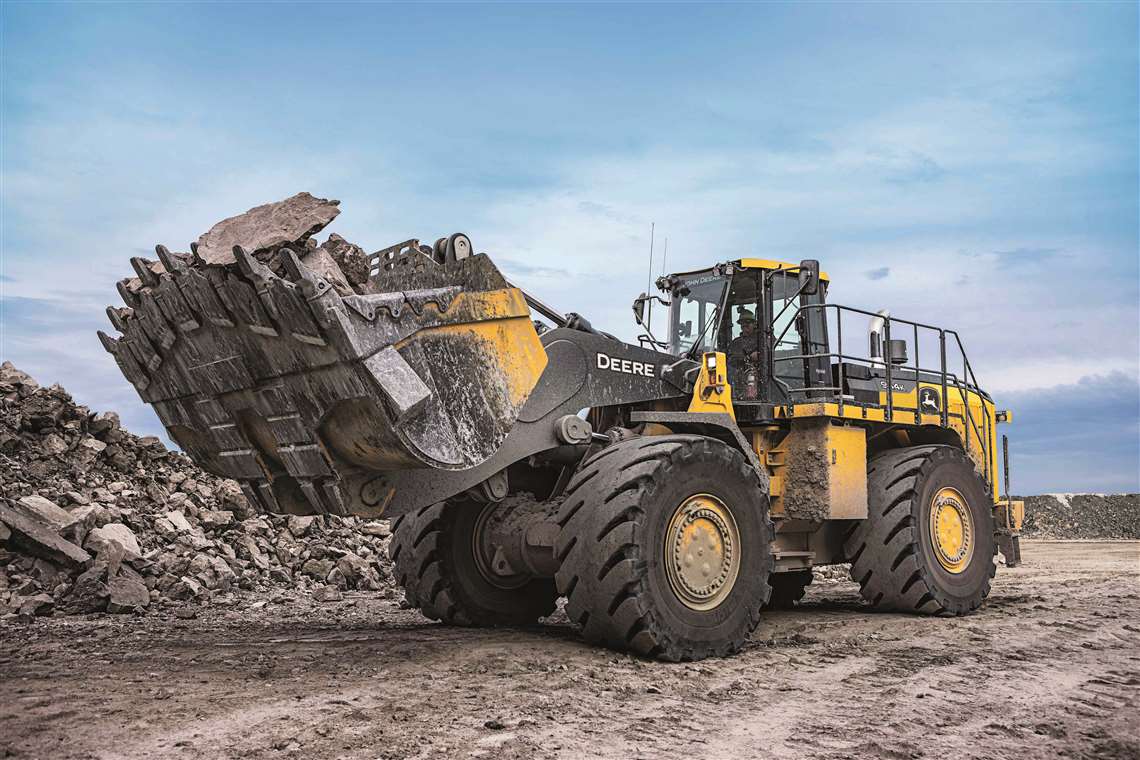 “The big challenge for our engineers was to develop a system that would give the driver feedback on the respective articulation angle and driving conditions at all times, while also enabling safe and comfortable working with the wheel loader. Our new joystick steering system with force feedback offers our customers exactly that.”

By offering operators three different options Liebherr are letting their operators decide, but clearly see that joystick steering has its advantages – such as enabling the operator to steer with one hand and making operating less physically taxing. 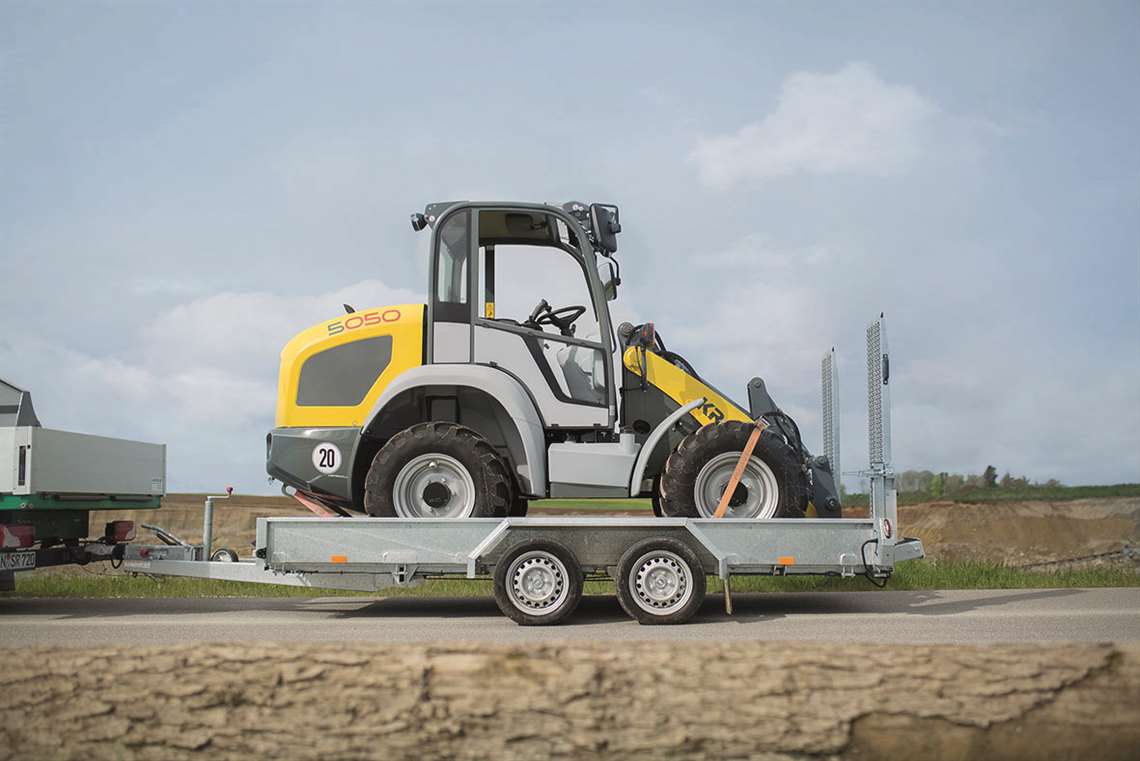 A manufacturer that has enjoyed success in the wheel loader segment, Kramer, announced in the middle of 2020 that it had introduced two new Stage V-ready compact wheel loaders, the 5035 and 5040, for tight working conditions.

The two newly developed compact wheel loader models, with different power ratings available, include the well-known 5035, which has an 18.5 kilowatt Yanmar engine, a bucket tipping load of 1,140 kilograms and an operating weight of 1,920 kilograms.

The new 5040 model is equipped with a 28.5 kilowatt Yanmar engine and has a slightly higher operating weight at 2,070 kilograms, as well as a bucket tipping load of 1,400 kilograms. Both models feature a new cab design, as well as some modern comfort features and power options. With their dimensions, they are ideal for low clearance heights and tight passages, making them ideal for the construction industry.

Another leading OEM in this sector,  Volvo Construction Europe (Volvo CE), recently announced that the company’s wheel loaders L60H up to L350H were receiving an update.

Volvo CE’s Volvo Co-Pilot monitor is now available on a wider range of machines – from L60H up to L350H. The 10-inch in-cab touchscreen provides access to several Load Assist applications (depending on machine model) aimed at optimizing operator performance and site efficiency.

A Tire Pressure Monitoring System gives operators real-time information on the conditions of machine tires. By monitoring individual tire pressure and temperature, the app helps to save fuel, prolong tire life, as well as avoiding expensive damage, repairs or downtime. 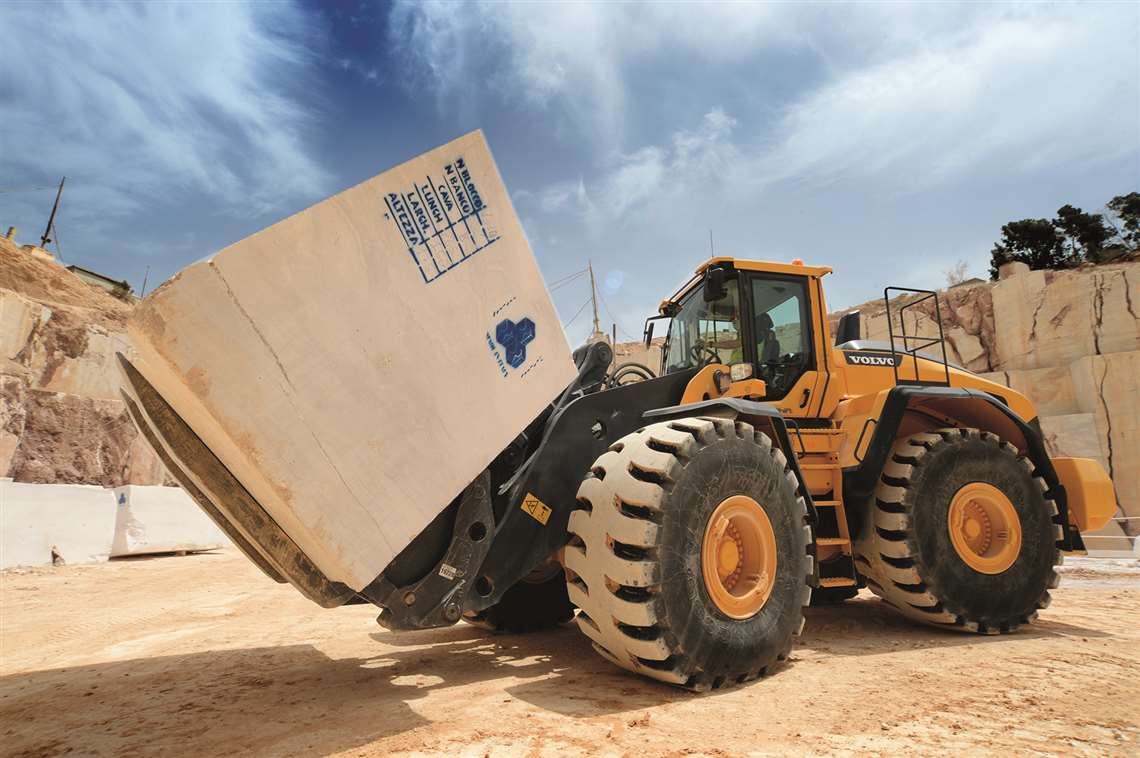 A map application has also been added so operators can get better visibility and understanding of the site layout and real time site traffic situation, allowing them to adjust their driving behavior accordingly. Weather, Calculator and Notes apps are new too – these functions work similarly to those found on a smartphone and are pre-installed in the Volvo Co-Pilot.

Wheel loader product manager Lars Eriksson commented that, “We are confident that these updates will help get the most out of the Volvo H-Series wheel loaders. As always we want to hear from customers and build on our knowledge to continue to bring the best machines that current technology has to offer.”

Looking to the future, it is clear that a wheel loader produced in 10 years’ time in 2030 will look very similar and recognizable to today’s models – it may be the biggest changes are more to do with how the machine is powered and its operating systems.

Talking about how technology can vastly improve an operators experience John Deere’s Gribble says that, “New electro-hydraulic (EH) controls are standard on all utility and production class L-Series wheel loaders. EH controls are one example of using technology to enhance comfort, ease of operation and performance.

“EH controls enable a host of benefits such as in-cab programable return to dig and monitor settings like soft stops, aggressiveness, and precision mode. These settings, and more, allow the operator to optimize machine performance for specific job tasks.” 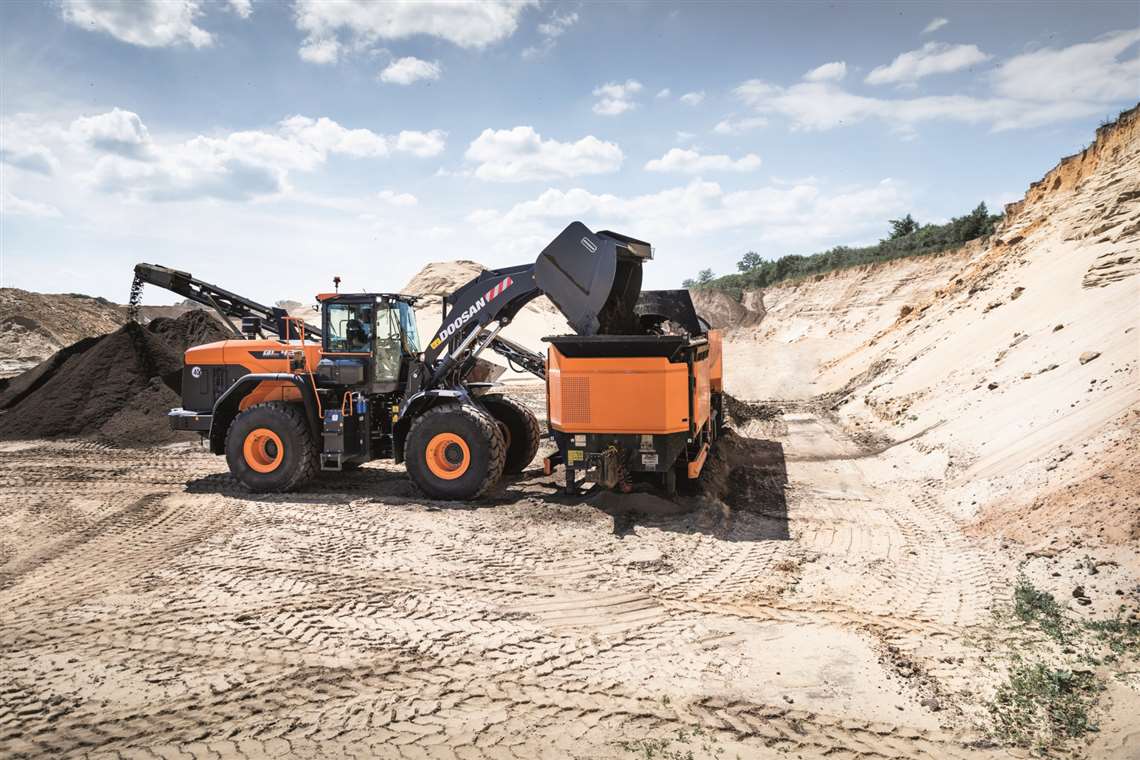 Christian Hallinger from Liebherr-Werk Bischofshofen GmbH comments that, “We can achieve the greatest innovations through the technologies of digitalization and automation, if we solve our customers’ problems and challenges and make their work processes more efficient, safer, and more reliable.”

He uses the example of the company’s further development of the assistance system ‘active personnel detection at the rear’ with two functions that will soon be available to the market: brake assistant and a hazard map. With the brake assist, as soon as a dangerous situation is detected in the rear area of the wheel loader, an automatic deceleration to a standstill is initiated.

Explaining about the hazard map, Hallinger says, “Dangerous situations recognized by the active personnel detection at the rear are combined with GPS points and can thus be displayed on a map via LiDAT (Liebherr Telematics Data System). This makes it possible to identify high-risk areas on the company premises.”

The wheel loaders of the future may not look vastly different, but they are sure to be safer, more comfortable to operate, more productive and packed with technology as standard.

Report: Now’s the time to get into infrastructure
Experts predict a rapid recovery for construction later this year, and urge contractors to innovate toward infrastructure to ride that wave
Loading...
MORE ARTICLES FROM CONEXPO-CON/AGG 365 NEWS

Report: Now’s the time to get into infrastructure
Experts predict a rapid recovery for construction later this year, and urge contractors to innovate toward infrastructure to ride that wave
Loading...
Previous Next ×